Biodiversity Net Gain (BNG) is an approach that leaves the environment in a better state than previously following development. BNG is to be a mandatory element of the planning system, but its principals are already being applied by developers.

One way to achieve BNG is the creation or enhancement of habitat for wading birds. Wading birds, or waders for short, are an order of birds that include around 350 species worldwide. Approximately 15 species are present in Britain in internationally important numbers. The creation of shallow freshwater or brackish pools, known as ‘wader scrapes’, can provide waders with important foraging habitat. If the pools are situated next to intertidal areas, they may also provide high tide roosting opportunities.

Wader scrapes should be situated towards the middle of large fields, in lower lying areas and away from woodland. They can be created in a number of ways, for example by blocking drainage or by scraping top soil from existing damp areas. The edges of scrapes are important. The margins should be irregularly shaped, shallow and relatively vegetation free. The land immediately surrounding scrapes is also important, ideally it should be flat and open. Once created, on-going management of scrapes is necessary. Ideally, water levels should be controllable and the land immediately surrounding the scrapes should be lightly grazed.

Wader scrapes can transform land that was previously poor for birds into magnets for foraging and roosting waders. Species such as Lapwing can be attracted to breed on scrapes, while Redshank pushed off a nearby estuary at high tide may use them for roosting. Passage waders such as Green Sandpiper and Ruff both regularly use wader scrapes, particularly in late-summer and autumn. Waders are an important group of birds, and yet suitable wader habitat is scarce. Wader scrapes are a relatively simple method to increase biodiversity. 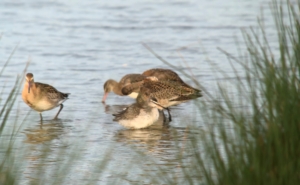 Spotted Redshank and Black-tailed Godwit feeding in deeper water in a wader scrape. 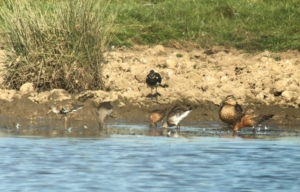 Ruff, Black-tailed Godwit and Lapwing feeding at margins of a wader scrape.

This site uses cookies. By continuing to browse the site, you are agreeing to our use of cookies.

We may request cookies to be set on your device. We use cookies to let us know when you visit our websites, how you interact with us, to enrich your user experience, and to customize your relationship with our website.

Click on the different category headings to find out more. You can also change some of your preferences. Note that blocking some types of cookies may impact your experience on our websites and the services we are able to offer.

These cookies are strictly necessary to provide you with services available through our website and to use some of its features.

Because these cookies are strictly necessary to deliver the website, you cannot refuse them without impacting how our site functions. You can block or delete them by changing your browser settings and force blocking all cookies on this website.

We also use different external services like Google Webfonts, Google Maps and external Video providers. Since these providers may collect personal data like your IP address we allow you to block them here. Please be aware that this might heavily reduce the functionality and appearance of our site. Changes will take effect once you reload the page.